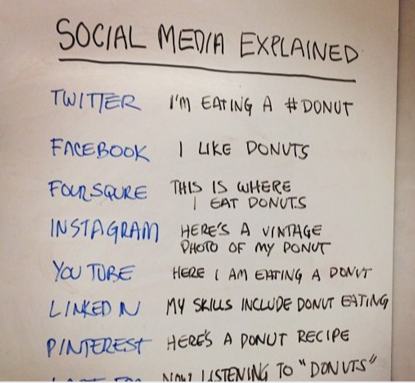 An article in the Guardian (31 Jan 2012) Be Better at Twitter: The Definitive, Data-Driven Guide by The Atlantic’s Megan Garber and the report from which it drew highlight some of the fascinating things happening around how we use and think about Twitter.

Basically it’s about a study by researchers Paul André of Carnegie Mellon, Michael Bernstein of MIT, and Kurt Luther of Georgia Tech who analysed 43,000 crowdsourced responses to tweets from 21,014 Twitter users via their site, Who Gives a Tweet. The results are hoped to provide answers to what ‘works’ in the twittersphere.

As they say:  We see two directions for utilizing these results. The first is in design implications to make the most of what is valued, or reduce or repurpose what is not. The second is in understanding accepted practice and value on Twitter, aiding users to create and consume more valued content.

Their report says that: “The most-liked categories were Questions to Followers, Information Sharing, and Self-Promotion (often sharing links that you created). To some extent, these results may reflect our sample bias of Twitterers. However, they also suggest that the Twitter ecosystem values learning about new content.”

The story gained a lot of coverage in the world’s media – typically of the ‘what we love to hate, ‘what a waste of time’ and ‘you should be’ varieties. Particularly popular was the reported result that : “Followers described 36% of the rated tweets as Worth Reading (WR), thought that 25% were Not Worth Reading (NotWR), and remained neutral about the other 39%.” So 63% of tweets aren’t that interesting.

The Telegraph boiled down the report to nine golden rules to follow to keep your tweets interesting. Compressed even further it would be:  Do: be new, short, a contributor and explain your links. Don’t: whine, use lots of @s, #hashtagsthatdon’tsayanything or talk constantly about yourself and where you are.

Why this isn’t interesting: The whole fuss is a bit scary, at a number of levels and the media spin speaks volumes to how we rush content out the door and on to the page (screen) to fill up space without a lot of thought. But:  One: ah, duh? How much of what any of us has to say on a daily basis is earth-shatteringly interesting? Two: people responding to anything on twitter (particularly this sort of thing) are disappointingly always ready to be harsh and judgmental but that doesn’t explain why they’re still there reading it all does it? Three: why do people need to be told how to talk to other people? And Four: being interesting all the time kind of misses the point, so what if some of your tweets annoy some of your people.

Generally speaking this is all stuff that should be pretty familiar to anyone who’s ever had a conversation. It describes the sorts of conversations we like to have and the ones we don’t.

But we’ve all had conversations with people we really like, even love in the case of our families (all the time) where they’ve told us things: we already knew, were irrelevant and uninteresting to us, have whinged a bit (or a lot), have taken far too long to get to the point or have taken a tangent we have trouble following. We’ve also all been guilty of eavesdropping on juicy conversations and twitter lets us do this all the time and who’d want to change that? And we’ve been annoyed by being forced to hear other people’s conversations that we didn’t want to hear, oh well, seriously, we live in a society work with it. It’s human stuff.

Twitter is a wonderful anarchic beast full of weird and wonderful people, inevitably some you like, a lot who you can’t stand. It’s a vast ocean of flotsam thoughts that better connect you to the richness of human experience, glorious and banal.

People who like you and who you’ve got to know, like to know what you had for lunch – at least some of the time. Whining about public transport will interest people who experience the same thing and they’ll enjoy sharing it with you. It’s okay to just put stuff out there from time to time and see what flies. Seriously, why does everything have to be useful? Or retweetable? If someone bugs you, just unfollow them, easy.

Why this is interesting: But on another level it is interesting because it articulates clearly and reminds us to think about why we’re sharing things on social media.

To an extent it shows how quickly twitter and social media have matured into professional publishing formats at least in certain eddies and curls of the global-conversation. We’ve taken twitter from a shy “how-ya-doin-I’m-over-here” space to an “excuse me, we’re serious publishing people don’t you know” (at least in 140 characters) space in a very short time.  And with that, the same rules that apply to all good content-provision have slid across into the broader public consciousness of written conversation.

If you’re going to write for ‘an audience’ it quickly stops being about you and switches to being about ‘them’.

This awareness of audience is well put in a blog entry I stumbled upon by J. Steve Miller on freelancewritersblog where he talks about lessons you can learn about writing from James Patterson.

And that’s basically want it comes down to: stop and think a minute: how can I tailor what I’m trying to say to make it interesting to someone else. How can I make them ‘feel’ like I do about this and engage with them?

It also depends on how many people you’re trying to talk to and who they are. Twitter allows us to have many simultaneous conversations, which is great. Sometimes, inevitably, they’ll overlap or clash but that should be okay so long as most of the time we’re inclusive and mindful of who we’re talking to.

From the same post Miller also notes: Don’t expect everyone to like your books. Stephen King has called Patterson “a terrible writer.” A Washington Post reviewer called one of his works “subliterate.” To which Patterson responds, “Thousands of people don’t like what I do. Fortunately, millions do.”.

i.e. You can’t please everybody all the time.

There is unfortunately a tinge of self-absorption and narcissism to the reported responses that anyone writing on the web has to be aware of. People are pressed for time and attention and can be harsh about what they feel ‘takes’ their time for granted. Even as they waste vast amounts of said time complaining about it.

So what does all this tell us about being good content providers, whether it’s in 140 characters or more? Well, I think it comes down to being nice and trying to be helpful. Sure that’s daggy but I think it’s true.

We want to read things that we can use in some way, that help us understand a confusing and complex world. We like things that are new to us, that surprise and delight. We want to find and share with other about what we feel passionate about and learn from others interesting things that will enrich us. We want to laugh, we want to feel positive and we want to share our experience of life.

And by the way I had pasta with a great chunky vegetable ragu for lunch.

The above picture: Social Media Explained is from http://curiositycounts.com/post/17318125885/social-media-explained-via and was tweeted by @brainpicker

There’s another in a similar vane at  http://theoatmeal.com/comics/twitter_stop