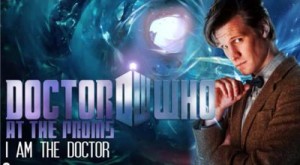 Not many orchestral performances could take over the 5,500+ seat Melbourne Exhibition Centre Plenary Hall (twice the size of the Hamer Hall) for two performances and pretty much sell out both.

The crowd was rolling in over an hour beforehand with as much security and ticket scanning as any major rock concert. Dotted amongst the crowd were quite a few fezs, casually worn suits with bowties and even a few people with black markings scrawled across their faces (to tally how many times they’d seen The Silence). They were excited.

How many of them had ever been to an orchestral performance before? What would they make of it? These questions seemed to have been considered very seriously by the architects of the Spectacular. This was a concert celebrating music written to accompany pictures, and that link wasn’t broken. Excerpts and compilations of scenes from the TV series accompanied the music, giving the music both its context and narrative. But it was also a celebration of the mythology of Dr Who with costumed characters such as: Cybermen, Silurians, Saturnyne vampires, The Silence, Judoon (those guys with the rhinoceros heads) and Daleks entering the stadium and prowling the aisles. In a moment of over fan-pandering there was even a pre-recorded greeting to the audience from the Eleventh Doctor, Matt Smith.

The concert focused only on the music of the fifth and sixth seasons (those with Matt Smith as the Doctor) composed by Murray Gold (who was in the audience for the show), which while entertaining did limit the concert’s scope. The MSO seemed to take it in their stride accompanied by the Concordis Chamber Choir and a few electric guitars and keyboard. The only hitch musically seemed to come for a bit of feedback and crackling at the beginning of show. Soprano Antoinette Halloran was somewhat wasted given how few actual lyrics she had to sing, mostly ethereal oohing and ahhing except for the thematic fishy-fog song from the 2010 Christmas Carol Special, originally sung in the TV show by Katherine Jenkins. Also accompanying the orchestra was the hauntingly beautiful countertenor Tobias Cole, who again had few words as he sang the Oodsong.

In the first half were familiar themes, the bouncy and energetic theme for Matt Smith’s doctor, The Magnificent Tale of a Mad Man in a Box and the music, which accompanied his first appearance in the series, ‘Untimely Arrival’. Other pieces were themed to specific characters, such as Amy’s Song, A little girl who still believed in stars and RiverSong or were stitched together medley’s of music created for specific episodes such as 1969 for when the Dr Who team headed to the American west or the pirate music created for Curse of the Black Spot.

Pulling the show together were MC Mark Sheppard, who played Canton Delaware III in the sixth series of Dr Who. Sadly Matt Smith and Karen Gillian weren’t available. Sheppard was charming, but had an overtly ‘fan-convention’ style which seemed a little forced. Of more significance was the focus of conductor Ben Foster, a close friend of composer Murray Gold, and the conductor of all the original studio recordings as well as the BBC Proms version. He was fabulous to watch, jaunty, expressive and fluid.

This was meant to be a fun concert, not a serious one, why else would you have Dalek’s “chase” conductor Ben Foster to the stage at the beginning of the second half. Or have them shout at the audience ‘Will you obey?’ only to cry ‘I can’t hear you’ as the audience spontaneously shouts back ‘No’. It was very much in this spirit that when technical hitches occurred, at the end of the first act in the matinee performance, ‘sonic screwdriver lights’ started squealing at the big screens from dozens of audience members, setting off ripples of laughter throughout the arena; a Dr Who audience equivalent to a Mexican wave. At the end of the concert there was a thumping standing ovation and many fans were deeply moved by the experience.

Though the audience was good-naturedly accommodating, the technical problems did seem to be avoidable, problems of poor communication and under-rehearsing. The experience also suffered from a lack of preparation for its scale, one guy dressed up as The Silence, really just a big head piece that wobbled, three Silurians and a handful of Cybermen obscured by billowing clouds of dry-ice hardly makes a big impact in a crowd of 5,500. You’d think they could afford a few more extras. The sophistication of cinematic editing and intimacy of the lounge room is difficult to translate to the arena and needs a far more rigorous conceptualization of its staging.

Undoubtedly this was orchestral-lite and those attuned to the nuance of classical excellence were unlikely to be impressed, but that wasn’t the point. The Dr Who Symphony Spectacular was a triumph of marketing and audience building. If orchestras are to be sustainable, responsive, inclusive, educative and appeal to a broad audience as well as an exclusive one then the Dr Who Symphonic Spectacular showed a possible direction other orchestras will be keen to emulate. And if I had any money to put on it, I’d be looking at the franchise to a Harry Potter version, right now.